Organisateur : United Nations, the governments of the Fidji Islands and Germany

The French Water Partnership (FWP) and its members attended the COP23 in Bonn from 6 to 17 November to support the cause of water together with the international water community in the discussions related to climate change and represent the diversity of French know-how public and private water actors. These are the good and bad news of this COP23.

This COP resonated with the strong rise of civil society presenting a range of projects implemented by cities, companies, NGOs, farmers through increasingly structured Alliances. The states launched a Talanoa Dialogue to facilitate the revision of their commitments made at the COP21 in Paris to reduce their greenhouse gas emissions and adapt to climate change by 2020. At last-minute negotiations, it was decided that the Adaptation Fund, previously under the Kyoto Protocol, would serve the implementation of the Paris Agreement. This decision favours adaptation projects and ensures the stability and continuity of this Fund, which is significantly important for developing countries. Furthermore, aboriginal and indigenous peoples, as well as gender mainstreaming, are now fully taken into account in the negotiations and an agreement has been reached for the establishment of an agricultural program.

Important initiatives were taken by states, such as phasing-out coal. France and Germany affirmed their will for taking on a European leadership for the implementation of the Paris Agreement. The French President, Emmanuel Macron, announced that France and other European countries would compensate for the funding needs of the IPCC, the group of experts in charge of global reference reports on climate change, linked to the withdrawal of states United. The president also spoke in favour of setting a CO2 floor price at European level and an EU border tax.

The discussions on crucial issues related to the implementation of the Paris Agreement, such as financing, have made very little progress.  Despite promises made by developed countries, in particular Germany, Sweden and Belgium, there is still a lack of focus on food in the various climate funds. Other major issues, such as “loss and damage” mechanisms for responding to extreme climate events and implementing climate commitments made by countries by 2020, have not resulted in real decisions. Many questions remain for the next COP24 in November 2018, as several reports released at this COP23 show CO2 in the atmosphere continues to rise in 2017.

And for the water?

November 10, COP23’s official water day, marked a mobilization of the international water community under the slogan #climateiswater and a collective will to develop solutions on a larger scale to mitigate and adapt to climate change. However, there are still many questions on how the negotiators and the states will learn from the water day, and the other thematic days, and how the learnings are to be implemented. Civil society actors can do a lot, but the states need to put in place national institutional frameworks to support the implementation of projects.

70 members of the FWP were present to advocate actively and collectively. 4 events organized by the FWP were able to share crucial messages about water-related adaptation in island states, disaster risk reduction strategies for water and sanitation services, the forecast of a world at + 4 ° C and the expected consequences on water resources. The promotion of nature based solutions through the circulation of the international declaration  collected more than a hundred signatures at this COP.

While the COPs provide a clear spotlight for climate change and climate issues, the FWP believes that the real official venues for promoting the contributions of the international water community and valuing its solutions should be sought elsewhere: Talanoa Dialogue and bodies of the United Nations Framework Convention on Climate Change, such as its Adaptation Committee. Actions must also be taken towards states to take water into account in their national policies, to international donors and to local decision-makers who decide on the implementation of projects.

The FWP was present at the international conference organized by France on December 12 in Paris (One Planet Summit) to mobilize all economic and financial actors to direct funding towards the fight against climate change. FWP was also active at the Paris World Efficiency fair, bringing together sustainable development stakeholders with the organization of a plenary on water and climate issues on December 12th.

Detailed program of the GCA

Program of the French Water Partnership and members

Our program of events

Our implication at COP23

The French Water Partnership will have a booth from the 6th to the 11th of November at COP23. It will be located in the exhibition area, at n°F.06.03 (check map).
We are waiting for you! 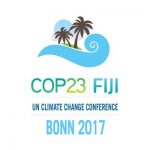 The COP23 will take place at the headquarters of the United nations in Bonn. This COP is situated midway between two strategic moments for climate negociations, with on hand the passed success of the 2015 COP21 in Paris which gave birth to the Paris Climate Agreement aiming to reduce global warming with the help of national contributions from the states ; and on the other hand the following COP24 in 2018 which will launch a prefiguration process in order to revise the contributions taken by the states during COP21.

A review of climate change today

Just over a year after the success of COP21, climate change issues are more concerning than ever. In its last status report on the global climate1 , the World Meteorological Organization (WMO) reported 2016 as being the warmest year on record, with a rise of 1.1°C compared to the pre-industrial era, i.e. 0.06°C warmer than 2015. The intense El Niño episode observed in 2015-2016 played a major part in the acceleration of global warming in 2016, reminding that “when natural variabilities interact with anthropogenic climate change, the impacts on human societies and the natural environment can be severe”.

Atmospheric greenhouse gas levels hit record highs again at the end of 2015, especially CO2 and methane. In November 2016, sea-ice extent had fallen more than 4 million km2 below the average of the period 1979-2015, while sea levels rose continuously as a result of expanding oceans and melting ice caps. 2016 was blighted by a number of extreme events: extensive drought in many parts of the world, particularly countries in Southern and Eastern Africa, led to poor harvests and major food shortages. Ethiopia experienced its worst drought in 50 years according to the United Nations, followed by considerable famine and the displacement of thousands of people. In contrast, severe floods hit South East Asia, causing hundreds of deaths and significant economic loss.

In light of these circumstances, there is an urgent need to step up and accelerate international negotiations to lower the emissions of greenhouse gases and help populations to adapt to the now inevitable global warming. Yet, negotiations held in Marrakech in 2016 failed to establish a hard and fast framework for implementing the Paris Agreement. While developed countries have reiterated their intention to mobilize $100 billion per year by 2020, there is a yawning gap between expectations in developing countries and the reality of funds available. Carbon price negotiations have been intense without actually resulting in a decision. And we should bear in mind that the total amount of nationally-determined contributions (NDCs) submitted by States to the United Nations Framework Convention on Climate Change (UNFCCC) after COP21 is based on an estimated increase in average of land temperatures of between 2.7°C and 3.5°C by 2100. Current efforts are therefore still insufficient to keep temperature rises below 2°C, which was the initial goal of COP21. It is urgent to scale up States’ ambitions with a view to reassessing NDCs. However, the review and revision process for these contributions will only be addressed at the COP24 in 2018. This means that adaptation strategies are now required in many countries. However, it is crucial to reiterate that such strategies must not be presented as a substitute to greenhouse gas reduction strategies. This delicate matter is particularly important in the current international context, and with the arrival of a climate skeptic at the head of the world’s second biggest country in terms of CO2 emissions.

Some positive progress in the water sector should, however, be highlighted, starting with a strongly-driven civil society, which is increasingly active in tackling climate change. The introduction of the Marrakech Partnership of Global Climate Action is a first step towards organizing the input of non-State entities in cohesion with the States. The UNFCCC secretariat demonstrates a genuine desire to fulfil its role of coordinating all the parties involved around the 7 topics selected in Marrakech (land use, oceans, water, human settlements, transport, energy, industry). The Technical Examination Process on Adaptation (TEP-A) established at COP21 and conducted by the Adaptation Committee, a subsidiary branch of the UNFCCC, prompts the more practical consideration of various climate negotiation matters. Water is among the topics on the TEP-A agenda for 2017. This sends out a positive message, although talks within UNFCCC branches are still far removed from the problems encountered by populations who suffer the drastic consequences of global warming on a daily basis.

Consult the FWP’s assessment of the COP22