The French Water Partnership (FWP – Partenariat Français pour l’Eau – PFE), a non-profit association governed by the French law on associations of 1901, is a muti-actor platform which works on conveying key consensual messages on water resources in the international arena.

ADVOCACY AND MULTI-STAKEHOLDER EXPERTISE AT THE SERVICE OF WATER : THE DNA OF THE FWP

The French Water Partnership is the only platform for all the French water stakeholders, public and private, operating at international level. For almost 15 years, the FWP has been advocating for water so that it becomes a real priority in sustainable development policies worldwide.  The FWP also stands as a facilitator for exchanges between the French and international water know-how.

The FWP’s mission is also to showcase at a global level France’s expertise and approach to water management. The French approach is a unique one: it actively involves multiple stakeholders and has continued to remain cutting-edge since it was introduced in France in the 1960s.

The FWP currently includes about two hundreds members from the water sector, including public and private stakeholders who reflect the nature of water management in France. These stakeholders belong to the six following panels:

The FWP carries out its activities in a collaborative and democratic manner, without any category of members taking priority over the others.

Together the members of the FWP develop common, consensus-based messages and communicate them in European and international bodies and networks such as the United Nations, the European Union, and the Union for the Mediterranean, and at events such as the Conventions on Climate Change, the World Water Forums, and the World Water Week conferences in Stockholm. 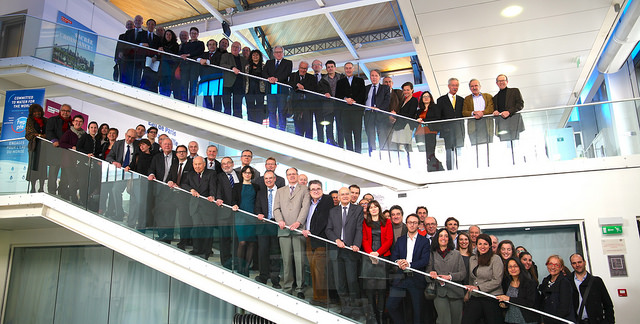 HOW THE FWP WORKS

All the FWP’s activities are funded by its members, in an equitable manner by public and private stakeholders.

The following members have provided their support to the FWP:

AREAS OF FOCUS AND ACHIEVEMENTS

To keep pace with current developments, the FWP is heavily involved in the field of climate change and the Sustainable Development Goals. It works tirelessly to ensure that water is given the attention it deserves in the context of these two overarching themes.

The FWP developed the international campaign #climateiswater during the COP21, which mobilized major global climate stakeholders for the very first time to demand greater visibility for water-related issues in climate negotiations and at the Conference of the Parties (COP) organized each year by the United Nations.

The FWP also made its mark by publishing a document to monitor the indicators approved in 2015 for the 2015-2030 Sustainable Development Goals. Proper monitoring of these indicators is essential to the effective implementation of the SDGs, including the Water Goal that was added in 2015.

GET TO KNOW US BETTER

Check out our institutional brochure.

Watch our institutional video below

Find out more about our multi-stakeholder governance